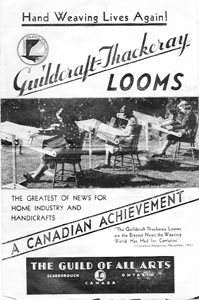 Phyllis Dean has been studying rocker-beater looms for almost 20 years. She was surprised to discover one that had a fly-shuttle mechanism built into the loom structure. She describes the unusual features of this loom and the challenges involved in restoring it.

Phyllis also tells us about the loom’s owner, Frank Kelsey Ogden [1868-1948], who had a weaving business in Draper, PA.

As part of a program sponsored by the New Hampshire State Council on the Arts, Craig Evans and Diane Howes did a traditional craft apprenticeship at the New Hampshire Farm Museum in Milton, NH. They set up their early 19th-century looms at the museum and wove traditional fabrics with natural-dyed yarns. In the course of the year, they overcame a variety of problems with the looms.

Diane Howes has been weaving on an old loom at the James House in Hampton, NH. Originally built by a weaver named Benjamin James in 1723, it was the home of his son and grandson who were also weavers. She tells about the house, the loom, and her adventures weaving there.

Sally Orgren was surprised to learn about the Nadeau Hand-Skill Loom, an all-aluminum tabletop loom designed by Elphege Nadeau in Woonsocket, RI, that was popular in the 1950s. With help from Janet Meany, she researched the history of these looms. When she acquired one, she figured out how it worked and whether it lived up to its advertisements.

The wheel and dobby attached to the top of the castle

Close-up of dobby and pins

At a recent guild sale, Susie Henzie acquired an unusual loom marked “Guildcraft Silent Speed Loom” from Canada. Janet Meany had an instruction manual for this loom in her Loom Manual Library. The booklet gave instructions on how to work the “Magic Shedder” device, which is the outstanding feature of this loom. Susie was able to warp it and weave on it.

Doug Elliott found an advertising brochure containing the full line of Guildcraft-Thackeray looms from The Guild of All Arts, Scarborough, Ontario, Canada, from around 1938. He describes the different looms and how they could be used.

Category: supplement
Most Recent Issue and Supplement
See all Issues or Supplements