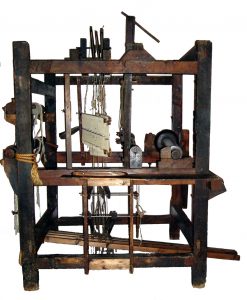 Side view of a mid-19th century four-post countermarche loom from Banbury, England, designed for weaving plush. It appears to be well-used, with very dark wood that shows wear. The loom is not warped and the shafts are at a slight angle. There three shafts and four treadles. The loom has some metal elements (the pivot points for the lamms, some elements on the shafts, some nails, and possibly the cloth beam, though the cloth beam may be worn-smooth wood). The loom is fairly self-contained, with two warp beams on the outside of the rear posts, but attached to them. The shaft mechanism extends outside of the loom fame on the top, as does a structure on top of the crossbar for the hanging beater bar.