In this edition we learn about several mid-20th-century looms. In each case the designer was aiming to modify hand looms to address a specific need: to make them easier for people with disabilities to use; to be more portable and compact; and to make it easier for people with very limited space to set up a loom. We are told of a mystery about a loom that appeared in a photograph supposedly from the colonial period, but probably is not.

Francine Jacobson was fortunate to study with Osma Gallinger Tod, the well-known weaving teacher and author. Francine acquired one of the looms designed by Milo Gallinger, Osma’s husband. She describes how the loom incorporates special features to meet the needs of Osma’s students and disabled weavers.

Sears has been a household word for more than a hundred years. I was surprised to learn that in the 1940s they sold “Hearthside Looms.” From the archives of her Weavers Friend newsletter, Janet Meany has compiled some of the information about them.

Nellie Sargent Johnson, of Detroit, MI, was the designer of the Hearthside Looms. She was a prominent handweaver and weaving teacher during the 1930s and 1940s. This biographical information also comes from the Weavers Friend archives.

Inga Askling and Her Two-Legged Loom

When Norma Smayda was given some sticks and strings, she wasn’t sure that it was a loom. However, she figured out that it was a two-legged loom made in Sweden in the 1980s that could be clamped to a table or window sill. With help from Jeff Mee and Elizabeth Hill she was able to set it up and make it functional again.

The Loom in a Wallace Nutting Photograph

In the first half of the 20th century, Wallace Nutting staged photographs claiming that the objects in them were from the colonial period. This wasn’t always the case. Sandra Rux was asked to determine if a loom donated to the Wentworth-Gardner House in Portsmouth, NH, was in fact the one pictured in one of Nutting’s photographs. Although the loom might be the one in the picture, she shows that it came from the early 20th century, not the 17th. 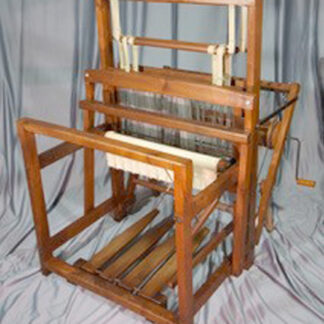