In this edition we learn about a loom made by a Swedish immigrant in Minnesota. More information about the looms belonging to a famous weaving teacher appears unexpectedly. A patented early 20th-century table loom is studied, and a one-of-a-kind loom is described. The history and current status of an important resource collection about looms is outlined

The Loom Built by Lars Hokanson

Nancy Ellison first learned about the loom built by Lars Hokanson from a student and a friend, Helen Bagne. This loom built by a Swedish immigrant is well documented as is the small community in which he lived. Nancy visited the Waseca County Historical Society in Waseca, MN, to study the loom and learn more about its maker.

Recently a collection of Shuttle Craft Bulletins from 1959, which had originally belonged to the Weavers’ Guild of Boston, came to their post office box, which I monitor. Mary E. Black, a well-known weaving teacher, was the editor at that time. In the December issue she wrote about Devereux Mansion looms. We had written about a couple of examples of them in Hand Looms, Supplement #8, June 2005. Reading Black’s article, I learned more about these looms and quite by accident discovered an image of them.

When he acquired a small table loom, Gordon Moat was surprised to see markings indicating that it was patented. He found a U.S. patent but also one in Great Britain. He describes his Barbour Linen Loom and Krysten Moranti’s and how they compare to the patent and the pictures in the instruction booklet about them.

Over her many years of collecting textile tools, Susie Henzie always liked the unusual. This loom, which was built on top of a classic school desk, has many unusual features. With help from her son, Greg Henzie, she tells us about them and how it works.

The Loom Manual Library collected and maintained by Janet Meany has always been the first place one looked when researching a loom. Patricia Bingham presents a history of the collection and its current transition to the Textile Center Library, located in Minneapolis, MN. 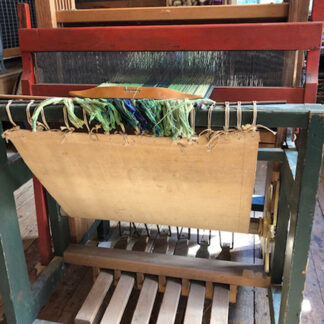