We begin our 26th year focusing on 20th-century spinning wheels, first wheels that were manufactured on the prairies of Canada, then wheels that were custom built in the Pacific Northwest. Small spindle wheels, found throughout Asia and the Middle East, have seemingly endless variations on how the drive wheel is constructed. We learn about two small wheels where the countries of origin are known.

Dawn Lawson introduces the Spin-Well spinning wheels invented by John Weselowski in Sifton, Manitoba, Canada, in the early 1930s. She describes their basic characteristics and traces the company history. Later in the 1940s the company became part of Made-Well Manufacturing Company, which produced the wheels into the 1970s. But there are still mysteries about these wheels.

When JoAnne Cook acquired a wheel made by Ernest Mason, it came with a magazine article about the wheel maker from Portland, OR, explaining how wheel making was his fourth career. Looking for more of his wheels, she found a spinner nearby, Gwen Powell, who knew him and more about his wheels.

Barbara Livesey was given the gift of a swift and two small spindle wheels. The previous owner bought the swift in Greece and one wheel in South Korea about 40 years ago. About the same time he bought a wheel from a dealer who said it was from Afghanistan. Barbara describes the unusual swift and the spinning wheels, especially their distinctive drive wheels. 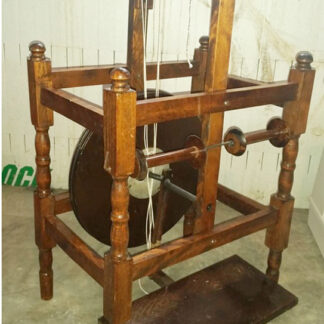