Once again we turn to Canada to learn about a variety of spinning wheels. Most were produced in the last quarter of the 19th century into the 20th. We are shown a horizontal wheel with an additional accelerating wheel and two treadles but in an unusual configuration. Several generations of a family of wheel makers in Quebec are traced from the 1870s to the 1970s. A close analysis of a pair of wheels demonstrates the constellation of attributes of an individual wheel maker also from Quebec.

When Michael Taylor obtained a horizontal wheel marked FM that was made in Quebec, he noted that it had not only an accelerating wheel on the table but also a double treadle. While he had seen many wheels with accelerating wheels and double treadles over the years, he had never seen one in this configuration. However, he discovered that it was especially strange when the drive wheel was reversed.

Caroline Foty introduced wheels marked J O, made by Jérémie Ouellet, in Issue #71. Since then, using the marks found on wheels, she has been able to trace his sons, Pantaléon and Ludger; a grandson, Lucien; and a great-grandson, named Guy. She describes the wheels constructed by the four generations of this family from Quebec.

A couple of spinning wheels marked O. DION came to Gordon Moat’s attention. They were built by Octave Dion from Quebec. Caroline Foty provided the biographical information. Gordon did a close structural analysis of these wheels to find the “constellation of attributes” that he feels are typical of this maker. This will help identify other wheels by Dion found in the future. 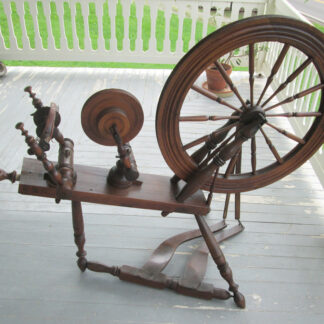