We begin with a careful study of a very fine example of a great wheel found in the heartland of America. We learn about two late 20th-century wheels that were bought from a company in Basel, Switzerland. Twin spinning wheels are discovered in the Outer Hebrides. Then we are presented with a very puzzling object. Was it originally a spinning wheel?

A Study of a Very Fine Wheel

Barbara Livesey had the opportunity to do a close structural analysis of a very fine great wheel belonging to a friend. She speculates on how it came to be in Indiana and describes its carefully crafted parts and the techniques used to create decorative elements.

About forty years ago, Edith Ogella wanted to buy some fiber blends unavailable in this country. A Swiss company, Strübin, sold them and also offered two somewhat unusual spinning wheels. She bought one, the Moswolt M-1, and really liked it. Later she was able to purchase a Humanus-Haus wheel from them. She describes the distinctive features of each of these vintage wheels.

When Norman Kennedy and a friend were in North Uist in the Outer Hebrides, they discovered the twin to a wheel she owns. He describes the wheels and provides a little of their history.

Jan Cunningham came across a spinning wheel that was disguised as a table, and she rescued it. Its structure and construction raise many questions. Members of Ravelry and friends have differing opinions about its origins. Jan describes its features and wonders if anyone has seen a similar wheel. 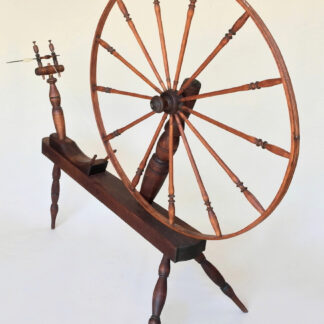