The mystery of who made the spinning wheels with the same name but dates spanning almost a century was solved with help from a genealogist. Two spinning wheel restoration projects uncover unexpected parts on each wheel. The first is on a wheel of Swedish design, and the second is a variation on patents from the 1860s for moving-spindle wheels with horizontal arms.

The McIntosh Family of Spinning-Wheel Makers

David Maxwell and others on Ravelry have been compiling a list of spinning wheels marked McINTOSH with dates that range from 1798 to 1889. They were built by members of the McIntosh family of Pictou, Nova Scotia. When David teamed up with Teresa MacKenzie, a genealogist, he was able to determine which man in the family was making the wheels during the different time periods.

To Spin on a Swedish Wheel

When a Swedish-style spinning wheel marked EES was donated to the Pioneer Village on the grounds of the Brown County Historical Society, in Nashville, Indiana, Barbara Livesey wanted to be sure it would be in working order for demonstrations. However, the drive wheel was out of balance and leaned against the rear post. Disassembling it, she discovered the core of the drive-wheel hub came out. She explains how she fixed it and why she thinks it was built this way.

An unusual wheel with a moving spindle on a horizontal arm came to John Sturtevant’s workshop. It belongs to the Kalona Historical Village in Kalona, Iowa. Grace Tully, the Loom Room curator, asked him to restore it to working order. He shows the parts that he needed to fix or replicate. While this wheel resembles two different patent drawings, it has a gear system not seen on any of the few known examples. 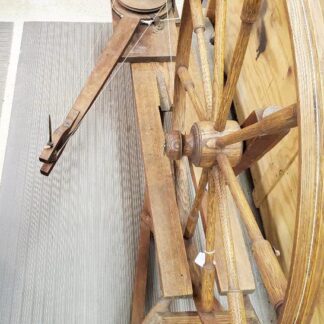