We start out in Ohio with new information about an early patent holder and how his design traveled. Returning to the subject of great wheels we learn how a child’s great wheel was constructed, and some variations on spindle heads are presented. Three one-of-a kind spinning wheels appearing at opposite ends of the world are described.

Doing historical and genealogical research has become much easier in the last 20 years thanks to the Internet. Census records are now on-line, and 19th-century local histories have been digitized. Recently with help from several people I have learned more about Jacob Shaw of Ohio, an early patent holder for a moving-spindle wheel. His design, which pivots from the floor, was carried by settlers from Missouri to Oregon.

The well-known spinning-wheel restorer Ron Antoine told me about the replica of the Aurora Colony wheel that he built and a poem he discovered written on the underside of one of the old spinning wheels in the Aurora Colony museum.

Ed Rowe knew that there were examples of child-size spinning wheels, but he had never seen one, even though he builds and repairs spinning wheels. But when his 11-year-old granddaughter asked for one, he worked out how to construct a “special order” for his special spinner.

Variations in spindle heads for great wheels continue to appear. Michael Holcomb describes two direct-drive examples, and Paul Menard discusses one that may or may not be an example of a direct drive.

One-of-a-kind spinning-wheel designs can be found all over the world. Carlton Stickney found his in upstate New York; Owen Evans found his in Brisbane, Australia; and Dorothy Lumb reports on one found in England. 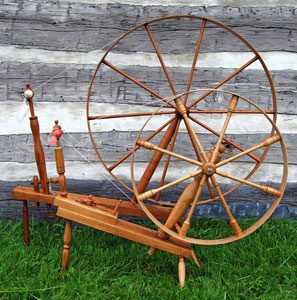