In this issue we see how a rare spinning wheel was restored, and we meet a wheel maker from Minnesota. We learn about an Early American wheel that has a different structure but familiar decorative elements. Two distinctive table designs are presented. We have both an update and an inquiry about swifts, and a catalog featuring textiles and textile tools is reviewed.

In earlier issues Sue Bacheller wrote about the rare cast-iron spinning wheel she owns. With help from her husband, Milt, she has finally finished restoring it. She gives us a step-by-step description of this long process that resulted in this colorful wheel.

Earl Oman has been making spinning wheels since the 1970s. His wife, Dorothy Oman, gives us a glimpse into his life with help from Ellen Black, the proud owner of two of his wheels.

Michael Taylor was surprised to find a vertical wheel, which is not a common structure among early American spinning wheels. Yet the turnings and decorative features resemble those of known wheel makers from Connecticut. As always, it raises more questions than answers.

Two distinctive table structures were found in distant parts of the world. Owen Evans reports on a split-table structure that originated in Sweden. Two other examples, belonging to Pat Bownas and Nancy Duncan, are also presented.

A Spinning Wheel With a Hinged Table in New Zealand

Mary Knox tells us about a hinged-table structure found only in New Zealand. They were made by Guy Wagg.

Swifts, used for unwinding skeins, come in several forms; the most common are umbrella swifts and squirrel-cage swifts. Michael Taylor gives us an update on Shaker umbrella swifts. He found an even smaller one than the five examples of different sizes he studied earlier. He reconsiders what we can learn from them.

Paul Menard has an inquiry about a squirrel-cage swift he found that has three cages rather than the usual two. He wonders why the third one was added.

Craig Evans reviews the catalog that accompanied the exhibit Stay at Home and Use Me Well. It is a treasure trove featuring Kitty Bell and Ron Walter’s extensive collection of textiles and textile tools. 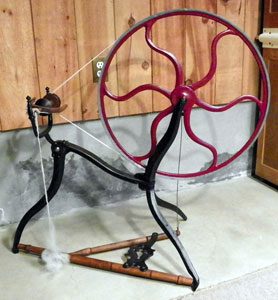