As we begin our nineteenth year, we learn about a family of spinning-wheel makers from Berks County, PA. We will see the different functions of a multipurpose wheel as well as the unusual structure of a reel. Two more one-of-a kind spinning wheels, from opposite ends of the country, are described.

Ron Walter continues his research into spinning-wheel makers from eastern Pennsylvania. Starting from initials he found on wheels, he was able to trace them to a father, Jacob Keim (1724–1799}, and a son, Johannes or John Keim (1756–1841). The Keim family homestead still stands. Ron describes the house and workshop as well as the characteristics of the spinning wheels built by the Keims.

Donna Lonergan thought that SWS readers might like to see the unusual Dutch wheel brought by its owner to Donna’s husband, Paul, to be repaired. It reminded her of the computer accessories that are “all-in-one,” since it spins, winds skeins, and holds bobbins. It made my husband think of the “Shop-smith,” a multipurpose tool, and it made me think of the “Vegamatic, it slices and dices and….”

Norrine Joyce found an unusual yarn winder or reel while taking a drive in Quebec many years ago. She was told that it is called a “chapeau de gendarme” or policeman’s hat.

We should probably call this section about one-of-a-kind wheels “with a little help from our friends.” My friend Laurie Autio told me about an unusual spinning wheel she saw at Susie Hodges’ house. Susie explained that the wheel came from her friend, Marion Norberg. Susie describes it and Marion gives its history.

Michael Taylor and Ron Walter told me about a strange spinning wheel with a horizontal drive wheel that belongs to their friend Bill Leinbach. Bill and Ron provide the description, and Michael and Ron contributed the pictures. 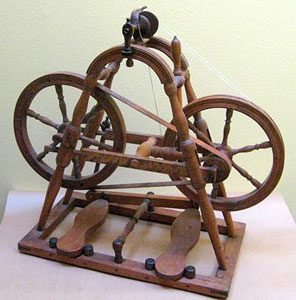