In this issue we learn more about the Keim family of wheel makers in Pennsylvania and about a signed Shaker great wheel in Maine. We revisit an early patented wheel and learn about another Dutch all-in-one wheel. Then we are introduced to a wheel maker from Washington State.

Ron Walter continues his report on the Keim family of spinning-wheel makers from Pennsylvania, this time focusing on their great wheels. He also discovered a reel made by a William Keim, of Germantown, PA, who might be a cousin.

Michael Taylor gives a short update on the Skinner patented wheels. He found an example that shows the alternative arrangement, as a quiller or bobbin winder, that is described in the written description of this 1818 patent.

In a small museum in Maine, Elizabeth Carey discovered a signed Shaker great wheel. The wheel was made by Allen Bangs of the Shaker community in Poland, ME. She tells about the family that preserved this wheel for 150 years.

When Keira McFleat received her first issue of The Spinning Wheel Sleuth she was surprised to see Donna Lonergan’s article about the Dutch all-in-one wheel. Keira recently acquired one that has a horizontal arrangement. She tells us about the Dutch spinner who gave it to her and her family members who spun on it. 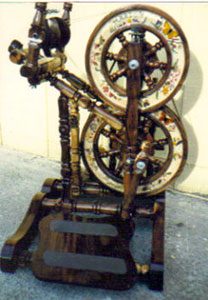