Spinning wheels marked Paradis and Desjardins were discussed in an article in SWS Issue #70. When it was published, I sent a copy to Desjardins Industries in St. André, Quebec. This is a large company producing equipment for agriculture, saw mills, and woodworking. As luck would have it, that letter reached Jerome Bouchard who is interested in the history of the company. I report on what he found.

A spinning wheel marked Charles Regeimbal started Caroline Foty researching another Quebec wheel maker. She found a good amount of family history and describes how this wheel resembles other wheels she has studied.

Two readers have recently acquired spinning wheels made from metal. Andrea Myklebust got hers from the estate sale of a well-known spinner. It came with the name “Conn Fence.” Owen Evans bought his wheel from a couple in Germany. The question is, are they “one-of-a-kind” spinning wheels?

The article in Issue #71 about a Scandinavian wheel brought in two more responses from readers. Norman Kennedy writes about how he acquired one many years ago. Donna Lonergan describes an example, with an odd construction feature on the hub, that was brought to her husband, Paul, to fix.

Grace Hatton also tells about an unusual, noisy feature on a wheel that her husband, Fred, was asked to repair. That wheel is very similar to the Swiss upright wheel I wrote about in Issue #72 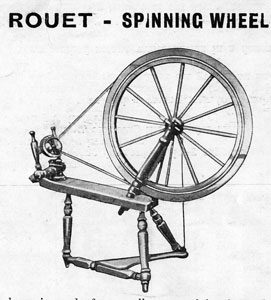