• Variations on a Joel Farnham Flax Wheel
• The Farnham Family of Owego, NY
• Restoring an Azel Wilder Great Wheel
• The Wilders of Keene, NH
• Inquiry: Was This Wheel Made by Wilder or Pierce?
• Thoughts on 20 Years of SWS

With this issue I am starting the 20th year of publication. My goal for this year is to revisit some of the wheel makers and types of wheels that were discussed in earlier issues, but to look at them from a different perspective. Then I will present some thoughts on the last twenty years.

Joel Farnham’s distinctive four-legged flax wheels have been written about several times, but Michael Taylor considers the source of the design by comparing them to some recently found variations.

The Farnham Family of Owego, NY

Shortly after I began the newsletter, Bill Ralph introduced the spinning wheels made by Joel Farnham and his sons. Joel Farnham was a researcher’s delight, because he signed his wheels. I recap what we know about the Farnham family of Owego, NY.

We studied the Wilder family of Keene, NH, because they were among the first to produce the accelerating wheel heads patented by Amos Miner in 1810. They also made great wheels. Cindy Lincoln visited the Historical Society of Cheshire County [NH] to study the Wilder great wheels in their collection. She tells how that helped her restore an incomplete one.

The Wilders of Keene, NH

I review what we know about the Wilder family of cabinet makers and spinning-wheel makers in the first half of the 19th century.

Inquiry: Was This Wheel Made by Wilder or Pierce?

Andrea Myklebust also visited the Historical Society of Cheshire County, trying to identify who made a great wheel she found. Her wheel is similar to the Wilder wheels, but also those made by Benjamin Pierce. We have studied Pierce because he was a manufacturer of accelerating wheel heads. Craig Evans, who has researched both Wilder and Pierce great wheels, provided her with valuable photos and measurements.

Thoughts on 20 Years of SWS

I reflect on the twenty years of SWS. Thanks to our many generous contributors, we have compiled a large amount of information about spinning wheels and related tools, which was my goal. This newsletter would not have been possible without personal computers, e-mail, and the Internet, but most of all, my subscribers and supporters. 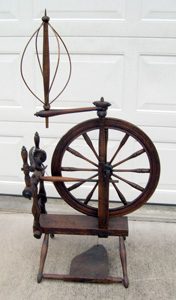