In this issue names on objects lead our researchers to the discovery of spinning-wheel makers in Ontario, Iowa, and New Hampshire. A 19th-century folding spinning wheel from France is also described and its origins traced.

A serendipitous discovery of a stenciled name on a great wheel started Gordon Moat on a quest to identify, locate, and learn as much as he could about the maker, Horton Row of Kemptville, Ontario. In the process he came to recognize the characteristics of Row’s great wheels as well as locating nearly a dozen extant examples within 100 miles of the location of Row’s shop.

Although the wheel marked W+MOOR that appeared on eBay had all the characteristics of the 18th-century spinning wheels from Londonderry, NH, made by the Gregg family, Michael Taylor had never seen that name before. Consulting a genealogy Web site he was able to find the connection to this well-known family of wheel makers.

For some time Michael Taylor has wondered about a little tabletop spinner he has that is marked “Rullman and Barker, Iowa Spinner.” While looking for something else on a genealogy Web site, he found some clues that may help him solve the mystery of who made this spinning wheel.

Owen Evans is fascinated by unusual spinning wheels. He describes his 19th-century upright wheel, how it folds, and the company that manufactured it in France. 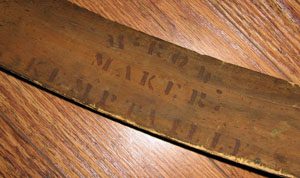