In this issue we follow a wheel maker from Quebec who has moved to Minnesota and we discover one of his wheels there. We study two unusual wheels that are in cabinets and learn how two parts of a hetchel are reunited.

In an effort to learn what happened to the wheel maker Charles Regeimbal when he moved to Minnesota, Jan Clark discovered his great grandson, David Regeimbal. He generously allowed her to photograph and examine the spinning wheel that his grandfather built that has come down in the family. Jan consulted with Caroline Foty, Reed Needles, and Lorinda Chard to better analyze the wheel and its relationship to other Canadian production wheels that they have studied. David also shared some of the family history.

The spinning wheel that Linda Martin bought was advertised on eBay as having a papier-mâché drive wheel. The other strange feature of this wheel is that all its components can be enclosed in a cabinet. She describes it and wonders about its origins.

Another Spinning Wheel in a Cabinet

Seeing Linda’s wheel reminded me of a wheel in a cabinet in the Cummer collection in the American Textile History Museum in Lowell, MA. Although I wrote the catalog description of this wheel originally, looking at it again I finally understood the double-pulley system of the different components.

The Story of the Mohawk Valley Hetchel

Willis Barshied has been collecting antiques for many years. He is especially interested in objects from the Mohawk Valley in New York State. Years ago he acquired a hetchel, or hackle. Then recently he found its cover. 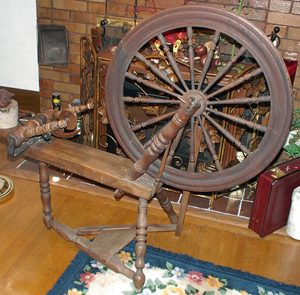