We begin our 21st year of publication by focusing on spinning wheels built in the 20th century. One is from the first part of the century in Australia, and the other is from the last quarter from New York State. We learn how to identify a decorator or non-functional spinning wheel, the dreaded SWSO.

Elizabeth Harvey in Australia has an upright wheel labeled “Strickland Silent Spinner.” She discovered that it was designed by a diplomat, Sir Gerald Strickland, and built by a company in Sydney. She tells how it was used by the Australian Red Cross during World War I.

While traveling in Texas in September, I visited Yarnorama in Paige, TX. The owner, Susan Fricks, showed me her “American Traveler” spinning wheel. I was intrigued and photographed it. It was designed, patented, and manufactured by Doloria Chapin in New York State in the late 1970s. To learn more about her, I contacted her daughter, Sunny Bixby, of Liberty Ridge Farm and Garden in Verona, NY. Doloria raised fiber-producing animals and was a well-known spinning teacher. She was instrumental in starting several spinning guilds. I describe the interesting features of this wheel, Doloria’s publications, and her place in the spinning community of that time.

As a restorer of spinning wheels, Reed Needles has seen a fair number of SWSOs—Spinning Wheel-Shaped Objects. He explains how to recognize one so that you don’t end up with a non-functional wheel that would be a costly mistake. 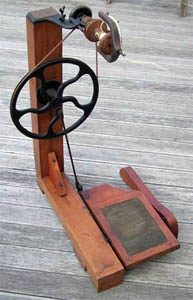