Large spindle wheels, known as great wheels, are the focus of this issue. We learn how one is constructed by a contemporary wheel maker in England. Then we travel across North America to learn about examples from 19th-century wheel makers in New York State, southwestern Ontario, and Oregon.

David Bryant has been constructing and restoring spinning wheels for many years. He describes the process of making a great wheel and explains the especially tricky steps required to form the drive-wheel hoop rim.

After helping to set up a great wheel marked R. TOWNLEY3, made by Richard Townley in West Dryden, NY, Jean Tyler acquired a great wheel marked N. R. HILLS. She learned that it was probably made by either a father or a son, both named Nathan Risley Hills, in Gouverneur, NY. She compares the wheels and presents what she learned about these early 19th-century New York State wheel makers.

Cheri Borden owns three great wheels that have lathe-turned tables. She describes this distinctive great-wheel variation, which seems to be found only in southwestern Ontario. Two are called “Brantford style” because examples were originally found in that city. One is marked W. DINNIN, and she tells us about this family of woodworkers.

A faded inscription on a great wheel sent Kay Williams on an extensive research adventure discovering Oregon Trail pioneer history. When she traced the person who made it, Miles Winchester, ca. 1848, and the person for whom it was made, Mrs. R. C. Geer, she found how they were connected and the very different lives they had. 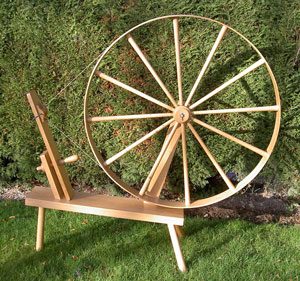