In this issue we will follow some threads that we have studied before. Another structural variation of wheels with double treadles and an accelerating wheel will be presented and what has been learned from the signed examples. A pendulum wheel signed by an Ontario wheel maker is compared to his other known wheels. A new wheel maker from Quebec is discovered from the initials on a metal treadle.

Michael Taylor continues his close analysis of early 19th-century American spinning wheels with two treadles and a secondary accelerating wheel. He has found another structural variation with several signed examples. However, his efforts to find the men who match the initials and names have raised more questions than answers.

A Pendulum Wheel by Horton Row

For several years Gordon Moat has been studying the spinning wheels built in the 1860s by Horton Row of Kemptville, Ontario. He was surprised to discover a pendulum wheel made and signed by Row. He compares it to other examples of Row’s spinning wheels.

When Owen Evans in Australia received Issue #87, he wrote to say that he had an example of the “Rare Double-Treadle Accelerated Spinning Wheels,” as described by Michael Taylor. Owen tells why he thought it was interesting from an engineering and spinning standpoint. He explains how the asymmetry contributes to the wheel’s marvelous ergonomics.

Although she has restored and built several spinning wheels, Linda Martin didn’t know much about Canadian production wheels when she acquired one. She enlisted the help of Caroline Foty, who has done extensive research on the makers of these wheels. The initials on the metal treadle, E. L. St. Frs., were the only clue. While Linda restored the wheel, Caroline discovered the maker – Elie Laporte. 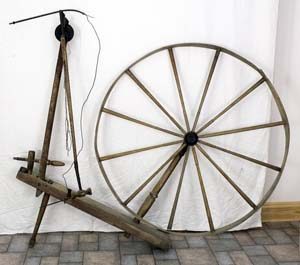