This issue is being brought to you by the letter V—for Virginia and Vermont. We will learn about the characteristics of spinning wheels that came from those states and some men who built wheels there in the late 18th and early 19th centuries.

A Great Wheel From Virginia

When Barbara Livesey acquired a great wheel that originated in Virginia, she was surprised by some of its features. As she researched these wheels she discovered that these characteristics were typical of great wheels from that region. She describes her wheel and what she learned about other examples like it.

Susan Hector and her friend, Rachel Ruston, attended an estate sale that included several spinning wheels. The great wheel that Susan took home was marked P. WOOD. She was able to trace him to Dover, VT, and learned about his other enterprises.

Rachel took home three signed wheels; one was marked TILDEN. We have documented a family of wheel makers named TILDEN working in Cornwall, VT. But was her wheel built by the father, Calvin Tilden [1744-1822], or by his son, Luther Tilden [1776-1826]?

Over the years we have heard about large spindle wheels marked S. MORISON that had Roman numerals on them. Nora Rubinstein has one marked XI and wanted to learn about the wheel maker, who was located in Vermont. She conducted extensive historical and genealogical research on the Morison family and made some interesting discoveries. She also recruited owners of other Morison wheels and museum curators to help her analyze the similarities and differences. 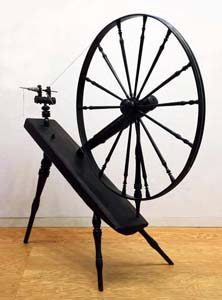