In this issue we focus primarily on 19th-century spinning-wheel makers from Pennsylvania. We will learn about two wheel makers from eastern Pennsylvania who produced distinctive wheels variously referred to as “Irish castle wheels” or “cassel” wheels. One is well documented while the other is illusive. In western Pennsylvania we discover a family of wheelwrights who were making spinning wheels for several generations. Their descendants preserved their tools. Then we are introduced to a contemporary woodworker who made very distinctive spinning wheels in the 1970s.

Daniel Danner of Manheim, PA, made spinning wheels on a tripod frame that he called “cassel” wheels. They are structurally very close to wheels from Ireland, known as “castle” wheels. Michael Taylor had the opportunity to study Danner’s account books and shares what he learned. He also presents another style of castle wheel that was made by Samuel Henry. Although he signed and dated many of his castle wheels, little is known about him.

The Kinsey Family of Spinning-Wheel Makers

Mark Ware was surprised and pleased to learn about the Kinsey [Kinzey] family of spinning-wheel makers in Bedford County, PA. He tells about the wheels and other tools made by family members. Most were produced by Henry Kinsey [1804-1876] and are marked H. K. with the date. Fortunately, one of his sons and a grandson saved his tools, and they are now part of a Kinsey Family Museum. Mark describes what he found there.

Recently Krysten Morganti acquired a Wind Mountain Wheel made by Steven Gray in the late 1970s. While we had an inquiry about these distinctive wheels in Issue #43, until now we hadn’t learned any more about them. Krysten located Steven Gray, who is still a woodworker, in Jerome, AZ. She interviewed him about how he came to build both traditional and contemporary spinning wheels, as well as what he is doing now. 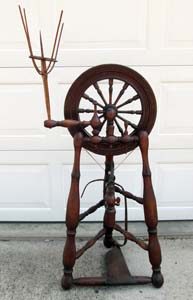