Over the last 24 years we have raised many questions about different types of spinning wheels and the men who built them. In some cases we were lucky enough to find answers, but that usually led to more questions. A great wheel on a square frame found in Nova Scotia leads to questions about a patented wheel from New Hampshire. The discovery of a full-size example of a trolley or track wheel solves the mystery of the model that was found, but it raises more questions. We will also learn the history of the design and manufacture of a late 20th-century spinning wheel from England.

David Maxwell found a great wheel in Nova Scotia that is unlike other great wheels in that it has a square frame. He heard of another example in Ireland. While superficially similar to the wheels based on the Skinner patent of 1818, he notes that the structure of his wheel has some important differences. A close examination of the construction details and the history of woodworking technology led him to conclusions about when and where it was probably built.

The eleven-foot trolley wheel that Judy Bontrager inherited has been in the Schrock family for several generations, mostly in attics. She recounts the family history and stories that came with the wheel and describes its unusual construction features, like the hinge in the track.

As soon as I saw the pictures of Judy Bontrager’s trolley wheel, I realized that it was the full-size version of the track wheel model that appeared in Issue #92. I attempt to place the wheel and the model in the context of what we have learned over the years about these long-bed wheels.

Dorothy Lumbs describes the origin and features of the popular British “Herring” spinning wheels. Commissioned in the 1980s by the Frank Herring & Son art supply company, it won prizes for its design and was produced until 2015. 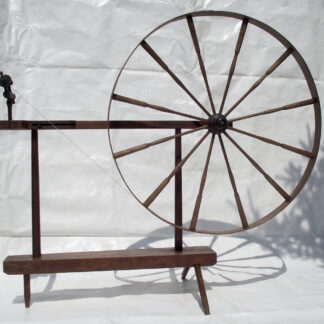