In this issue we learn about two partially mechanized flax processing tools. Three 18th-century Pennsylvania spinning wheels with dates are analyzed. A rare and unusual spinning wheel in New Zealand is discovered. And we are introduced to a retired farmer from Minnesota who built spinning wheels.

The Scutching Wheel and Rotary Brake

At the Flax and Linen Symposium in August 2016, Christian and Johannes Zinzendorf brought and demonstrated a scutching wheel and a rotary brake. Johannes explains the evolution of these tools, which are part of the transition to industrial flax processing, and how they work.

Michael Taylor had the opportunity to compare a flax wheel dated 1754 (?) with two other wheels dated 1767 and 1770 that are definitely from Pennsylvania. He and a few friends analyzed the similarities as well as the differences. They came to some conclusions but also raised new questions.

When Lynne Boulter read about a friction-drive wheel made during WWI in Gisborne, New Zealand, in an article by Mary Knox, she decided to search for it, since she lives in that area. An article about her quest appeared in the current local newspaper. Much to her surprise and delight, she found one. She and Mary tell the history of these rare wheels and how they work.

Nancy Ellison introduces Manville Hagen, a retired farmer from Emmons, MN, who built spinning wheels when he was in his 80s. She describes the different styles of wheels that he produced. 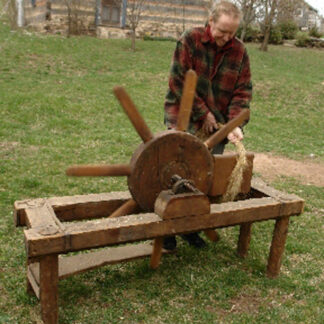