In this issue we learn how research by museum curators on two signed great wheels led to the discovery in one case of the wheel maker’s connection to an early president and in another to the original owner of the wheel. Travels in the Hebrides islands led to the acquisition of a rare spinning wheel, and travel to Thailand resulted in a collection of child-size textile tools.

When Colonial Williamsburg acquired a great wheel with the mark W. FITZ, the curators were surprised to learn that it was made by William Daniel Fitz, a chair and spinning-wheel maker in Albermarle County, Virginia, and that he sold some of his products to Thomas Jefferson. Martha Katz-Hyman explains how a close study of Jefferson’s Memorandum Books and the probate inventories of William and his son John led to their conclusions. [Images courtesy of Colonial Williamsburg Foundation.]

A Spinning Wheel With A Family History

A great wheel marked F. A. FARNHAM that was donated to The Home Textile Tool Museum came with an intriguing photograph and a note saying “Pop’s grandmother’s spinning wheel.” While the Farnham family of wheel makers is well documented, Pat and Victor Hilts recount how they found the grandmother who was probably the original owner of the wheel.

In 1965, while traveling in the Hebrides islands off the west coast of Scotland, Norman Kennedy found an abandoned spinning wheel. He tells what he later learned about its origin and how it works.

Susie Henzie always searched for textile tools wherever she traveled. In 1990 while she was in Bangkok, Thailand, she acquired a set of child-size textile tools. She describes them and tells how they followed her home. 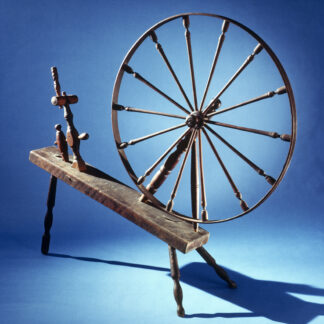