It’s hard to believe that I have been publishing the newsletter for 25 years. There is still much to learn about spinning wheels and related tools. Our contributors have taken us all over the world. This time we travel to Estonia to learn about the different spinning wheels found there. An expert tells about his discovery of a style of wheel he never saw before. We begin a study of the patent models that were submitted with U.S. patents for spinning wheels in the mid-19th century.

Mathilde Lind visited Estonia and reports on the spinning wheels that she found in different parts of the country in museums and historic sites. While in many ways similar, they also illustrate some of the geo- graphic, historical, and political influences on the country.

A Spinning Wheel Marked I. IVES

Even after decades of studying and collecting American spinning wheels, Michael Taylor, with help from Bill Leinbach, discovered a spinning-wheel design he had never seen. It is marked “I. IVES”. He describes the wheel and the little he has been able to learn about the wheel maker.

One of the reasons I started The Spinning Wheel Sleuth was to report on my continuing research on moving-spindle wheels. While the newsletter’s focus has expanded, they are still my favorites. Many of them are patented. Early on I learned about the models that accompanied the patent application, and they fascinated me too. A few years ago, I had the opportunity to study the collection of 22 patent models of spinning wheels in the Division of Home and Community Life in the National Museum of American History in Washington, D.C., through the generosity of Associate Curator Barbara Suit Janssen and with photographic assistance from my husband, Peter Wood. In this issue I’ll begin by presenting a broad overview of the devices the models represented. Future articles will study the ingenious ideas the patent holders proposed. 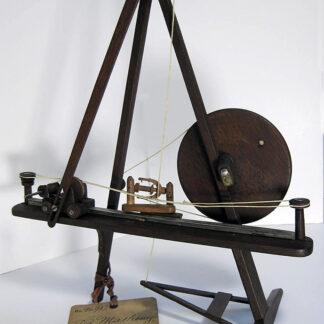