• A Plush Loom from Banbury, England
• A Loom From Nova Scotia
• Looms of the Depression
• A Norwegian-Style Tape Loom
• Inquiry: Is It a Loom?
• The Loom for the California Rug
• A Loom Museum
• Two Reviews

This edition takes us all over the map and through a wide range of time periods. We travel from England and Norway to Nova Scotia, then across the United States. We begin in the late 18th century, make stops in the 19th century, and then continue into the 20th and 21st. We have reviews of an exhibit and a book as well as an inquiry.

A Plush Loom From Banbury, England

Alan Raistrick tells us about a loom in Banbury, England, that was used to weave “plush,” which is a pile fabric similar to velvet but with a longer pile. He describes the special features of this loom.

A Loom From Nova Scotia

Although Alicia Watson found her loom in Connecticut, she knows that it was salvaged from a house in Amherst Head, Nova Scotia. She details its history and unusual characteristics.

Looms of the Depression

Over the years Susie Henzie has collected several table looms that were originally used by different agencies established as part of the New Deal in the 1930s. She describes these looms and how she acquired them.

Fascinated by the hole-and-slot tape looms that she saw in folk-history museums in Europe, Grace Hatton convinced her husband, Fred, to build one with two sets of holes. When she researched them, she found only a few examples and very little information about how to weave on them.

Inquiry: Is It a Loom?

An INQUIRY about an object that looks like a hole-and-slot lap loom, but is missing the holes, mystifies our panel of experts.

The Loom for the California Rug

To weave her large 5′ by 15′ California Rug using a knotted-pile technique, Vicki Fraser needed a special loom. She recruited her son Simon to build it  for her. He describes its creation and unique features.

As part of her rag-rug weaving studio, Linda Bertanzetti has collected a large number of looms from a wide variety of manufacturers to create a loom museum. She tells about a notable addition, a 100″ Clement loom from Canada. 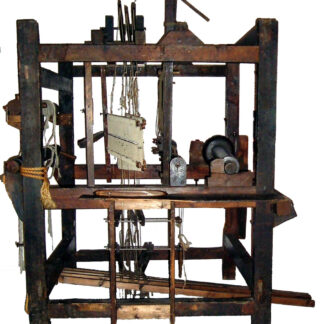