In this edition we learn about semiautomatic looms and wooden hand looms. We will view the semi-automatic Deen looms from several perspectives—finding them in museums and in use, their history from the point of view of the inventor’s son, and descriptions of the various models from the company literature. Then we meet a loom collector who has Deen looms and many, many others. The hand looms that were studied come from early 19th-century Massachusetts, early 20th-century Southern crafts schools, and late 19th-century Hungary.

Sally Orgren has been coordinating the weaving volunteers for the Millbrook Village Society located in the Delaware Water Gap National Recreation Area, since 2004. She was surprised to learn that they have a Deen loom in storage. To study more examples of them she traveled to Harlan, IA, where Deen looms were built. But then she found an example not far from home in New Jersey.

Janet Meany has been studying the Deen Loom Company for a long time. She met and corresponded with the late James Russell Deen, the son of the founder, James Madison Deen. She shares what he told her about the company. From her extensive collection of catalogs, instruction manuals, and advertisements, Janet also describes the wide variety of loom models built by the Deen Loom Company between 1898 and 1947.

At my suggestion, Kathleen Armstrong went to visit Neal and Nellie Springer to see some of his Deen looms. Much to her delight she discovered that the Springers’ collection contains looms of all types. She describes this as a “weaver’s wonderland.”

Barbara Provest’s interest in weaving and spinning has always been tied to her interest in history, and over the years she has restored many old looms. She describes the interesting features of the two early 19th-century looms that she recently reconstructed and the historic houses in which they are located, near her home in Massachusetts.

Looms of the Settlement Schools

A gift of a small loom started Pam Howard on a research journey that has influenced her teaching. The loom is similar to those used in the Settlement Schools in Appalachia in the early 20th century. She was able to trace her loom to the builder, Ed Davis, who was very involved in that crafts movement in the 1930s and 1940s.

Adele Harvey combines her expertise as a weaver and her knowledge of Hungarian to present a survey of the hand looms in use in late 19th-century Hungary. Her source is a series of rare books written by Dezső Malonyay in the early 20th century that documented Hungarian folk art and culture. 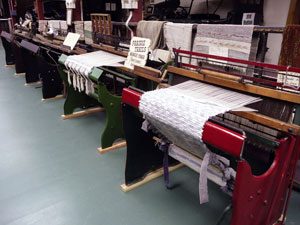