To learn more about looms, we travel in this edition to northern Europe, England, Sweden, and Latvia, before returning to the states of Massachusetts and Minnesota.

For more than 160 years, the Pilling Loom Company provided looms and other machinery for the cotton textile industry in Lancashire, England. Anthony Pilling tells about his ancestor, John Pilling, who began by improving hand looms, built Dandy Looms, and went on to manufacture the machines that were the tools of the Industrial Revolution.

When Lois Swales bought a band loom from Sweden, it came with a beater knife. She acquired a couple more examples and discusses the characteristics of these tools. Her research includes how these beater knives were used.

A Weaving Studio in Saldus, Latvia

Brigita Veidis spends part of the year in her native Saldus, Latvia. When there, she weaves at a government-run weaving studio. She describes the types of looms that the studio has and what the weavers produce.

Restoring the Loom at the Whittier Homestead

An early 19th century barn-frame loom at the birthplace of poet John Greenleaf Whittier in Haverhill, MA, caught Terry Anderson’s attention. She recruited friends from the NOBO [North of Boston] Handweavers to help her restore it to working condition.

A Visit to the Ripley’s Loom Museum

Always on the lookout for old looms, in 2005 Janet Meany visited Chuck and Donna Ripley to see the small museum of looms that they had. She reports on what she found. Sadly, the Ripleys died a few years later. 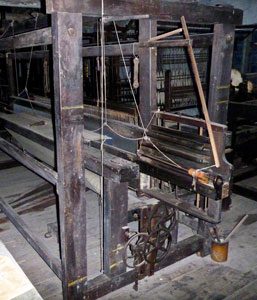